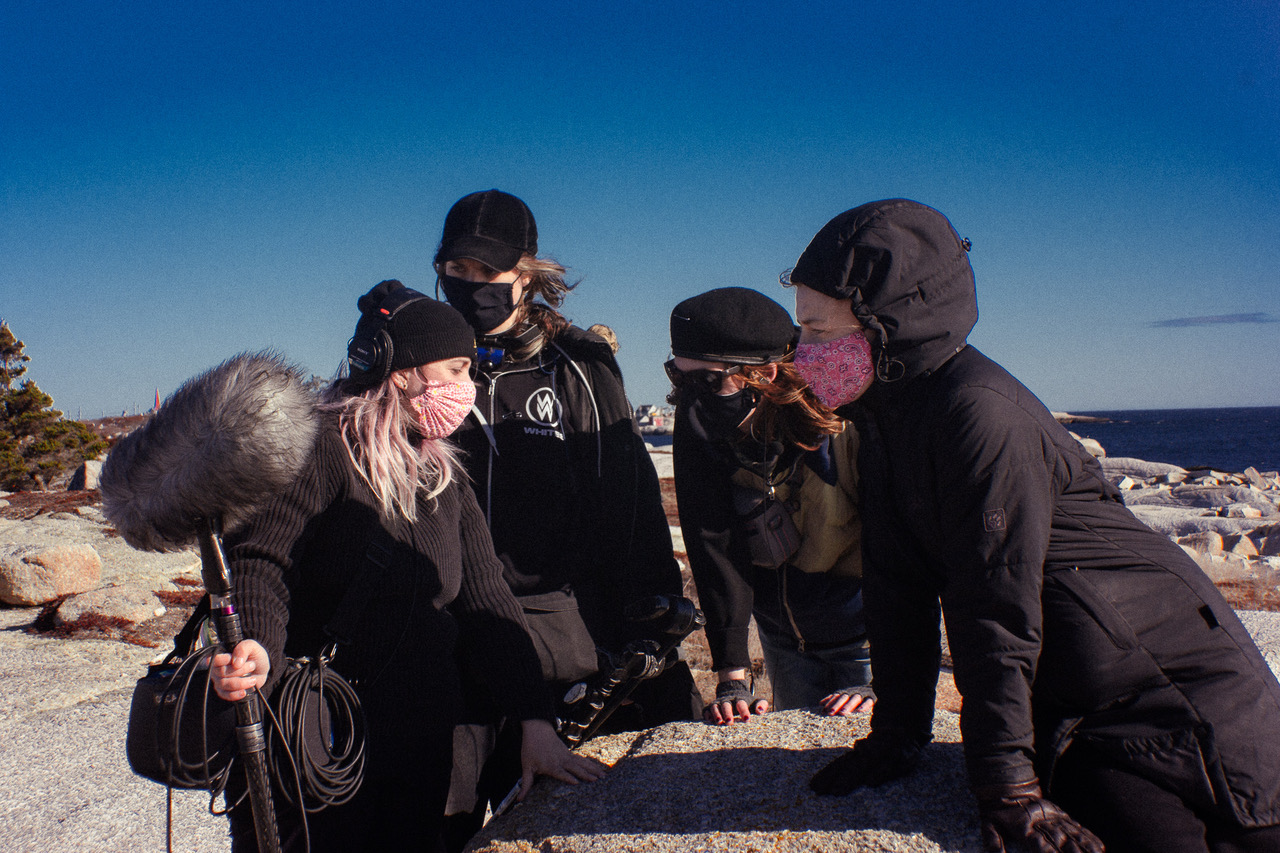 Olivia King (she/they) is a multidisciplinary artist with an innate drive to combine logic, emotion and creativity in the work she produces. King plays a crucial part in sound departments among Atlantic Canadian projects, such as the television series Diggstown and Feudal, also the upcoming feature, Compulus. She brings technique, artistry, and focus to her work as a sound recordist, which I have had the pleasure of witnessing. Brielle here, WIFT-AT’s Communication Coordinator: I am happy to share a socially distanced, laugh-filled interview with Olivia, giving you insight into how one artist fell in love with a technical position after years of being center-stage.

King, who grew up on Prince Edward Island, spent her childhood deeply centred around the Charlottetown arts scene: “It’s a really special place. It’s magical.” She grew up participating in local theatre in PEI, moving out at sixteen in the summers to pursue musical theatre gigs acting onstage. When it came to the end of high school, King found herself caught in a career crossroads. She had auditioned for the National Theatre School in Montreal but felt conflicted with pursuing theatre over academics, which she also excelled in.  King: “I was thinking about maybe doing bioethics. And then I was like, oh, but I’m also really interested in law. And thought, well, I would love to be like an entertainment lawyer.”

She was nudged to apply to Nova Scotia School of Art and Design with the idea of either going to law school or continuing to pursue arts afterward. King admits that she took visual art classes in high school and “just never thought it could be a career path for me.” She applied and got accepted. King continued working on stage for the summer, travelled to Europe the following fall, and moved to Nova Scotia in January to start her degree at NSCAD.

King described how she began with an interdisciplinary degree in ceramics, textiles, and performance art, which did not last long after taking her first film course. When the professor for the class realized King was not in film studies, they vehemently convinced her to switch her degree after seeing her genuine interest and talent in the field.

King: “I then took a sound for film course, and I immediately fell in love with it. It was part science and sound theory and part practical information. My dad’s a musician; I’d grown up playing tons of different instruments and knowing music theory. Adding sound theory to that was really exciting. I was obsessed with the intersections of science and math and movement because I also used to be a dance teacher. I was interested in how boom operators and foley artists use their bodies in their jobs. Also, the aspect of working with actors having been an actor was great. So then, throughout the rest of my degree, I did sound for everyone’s films.”

LeBlanc: “Oh my God, that’s awesome. So it was love at first sight.”

King: “Yeah, I was obsessed. I must have been so annoying [in class] because everything Lukas Pearse [professor and sound technician] would say or do, I’d be like, ‘Oh my god, that’s so cool.’ Microphone, pickup patterns, sample rate, bit depth, all of it. It was everything because it was the movement from dance like I love finding that perfect placement, and then being able to memorize lines with actors, so you know who to cue to next. All the skills that I had procured throughout my childhood were fitting together into this career that I didn’t know existed.”

After graduation, King began working on union sets. I asked about their experience in sound departments and how it feels to be a queer woman in a male-dominated area of crew. They revealed that it was pretty great and how sound departments appreciate having diversity in gender when it comes to wiring microphones to actors to ensure comfort.

King: “Working on union shows, I never really felt like people looked down on me or questioned what I knew. Some older guys would be like, ‘do you know how lenses work?’ And I’d say, ‘Yes, I went to film school, I know how they work.’ Then after that, it’s just good teaching moments.”

Olivia immediately fell into the world of sound onset, but her interests do not solely lay there. I brought up King’s short called ‘The Irving Tower,’ which I saw during the 2020 Halifax Independent Filmmakers Festival. It is a piece that captures a conversation between strangers on the grounds of an old historic Irving gas station, turned car rental agency, turned vacant lot. King overlayed their animation over footage of the ex-station to create a personal and exciting touch to the dialogue and picture.

LeBlanc: “Would you be interested in writing and directing? And looking at animation again?”

King: “Yeah, I would. That’s what I really like. I love doing sound for other people. I love being a part of other people’s projects; it’s my way to contribute to their stories. But I love writing, directing, and animating. While going to NSCAD, you’re constantly pushed to create, create, create. I came out of NSCAD having three completed shorts under my belt. But felt over-worked creatively. I left school and said, ‘Oh my god, I don’t want to write and direct right now. I want to work on other people’s films and contribute in that way.’”

King is a multidisciplinary artist with a natural talent for sound. Her story shows the different approaches to which people enter the film industry and stumble into niche roles on set. We finished our chat by discussing the remarkable and daunting aspect of film being a medium that necessitates collaborative momentum from different departments, all holding individual artists and specialists in their crafts. It is beautiful to witness the dedication of multiple creatives to pursue one picture. For Olivia King, her specialty is sound, an element that provides a seamless emergence into the diegetic world onscreen. She crafts audio with intent, dedication, and skills. Keep an eye and ear out for her work in the upcoming months; you’ll be seeing the name ‘Olivia King’ during many end credits.